In the short term, the University of Leuven wishes to realize a new building on its Arenberg III campus in Heverlee for the Department of Biology and the Flemish Institute for Biotechnology (VIB), called Leuven Bioscience.

After an intensive design competition, the integral design assignment was entrusted to the consortium consisting of Proof of the sum, SVR-ARCHITECTS, Exilab and Studieburo De Klerck. Proof and SVR are responsible for the architectural design. Exilab brings its expertise in field techniques and building physics. De Klerck is involved in the design as structural engineer. 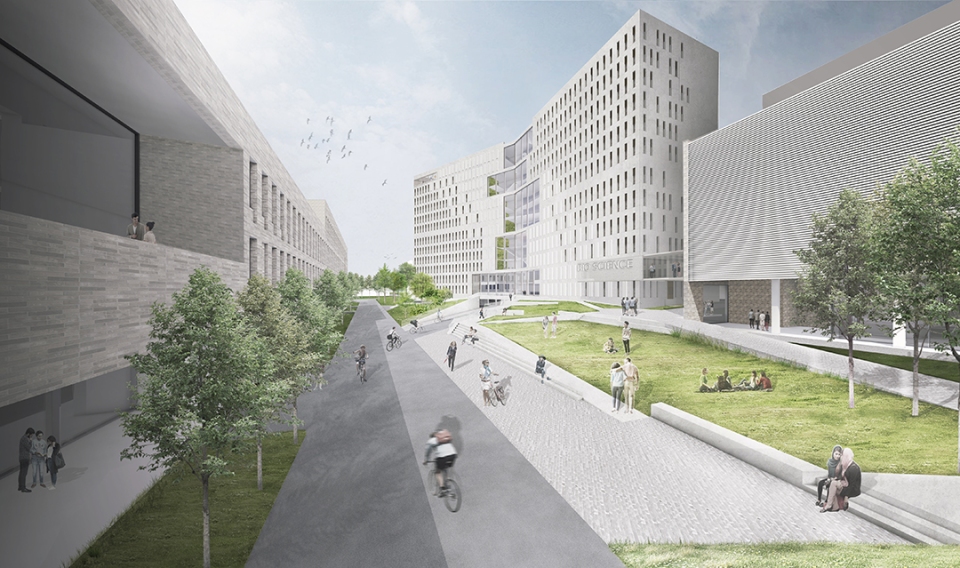 Create public square
For campus Arenberg III, an urban development strategy has been developed that departs from the principle of densification. Within the ring road, building fields with higher density alternate with a playful mix of streets and squares. The realization of Leuven Bioscience fits perfectly in this strategy of compaction. An intensive building volume, together with the ‘Quadrivium’ and ‘Leuven Chem & Tech’ buildings, will create a new generous public square. Due to the characteristic bend in the rational beam-shaped volume, a sheltered logistics square for Leuven Bioscience is created on the traffic-calmed north side.

Benefitting the high-rise
The starting point of high-rise buildings is maximized by positioning one clear beam-shaped high-rise volume in the landscape. This leads to a map in which the balance between rising points, disentanglement of flows, façade orientation and the logistics order come together as one efficient whole.

Orchestrating flows
The kinked bar allows to orchestrate the various flows in a natural way. The users of the building reach the main entrance at level +1 via a naturally rising landscape. The large amount of cyclists remain at street level. The daily logistics reach Leuven Bioscience through a new link with Leuven Chem & Tech at street level. One level higher, on the other side, is discretely reached by the logistics court along Leuven Nanocentre. A clear separation between flows of goods and people is also made within the building. This allows the research processes to take place undisturbed.

Knowledge sharing is central along one social axis
From expertise and research it is known that organizational and spatial design forms a symbiotic breeding ground for innovation. That is why Leuven Bioscience is designed from one single heart. The central vertical spine in the armpit of the kinked shape becomes the nerve path for knowledge sharing and interaction. Ultimately this connects all users of the new research building.

Programmatic ordering
The building has one universal grid where all functions of the 27,000 m2 building volume can be fitted. This underlines the ultimate flexibility of the design concept shown: almost the entire program can be programmed virtually anywhere in the building. This is also necessary in order to be able to continue answering the unknown research question in the future, but also to postpone decision-making about the definitive layout of the building as long as possible. 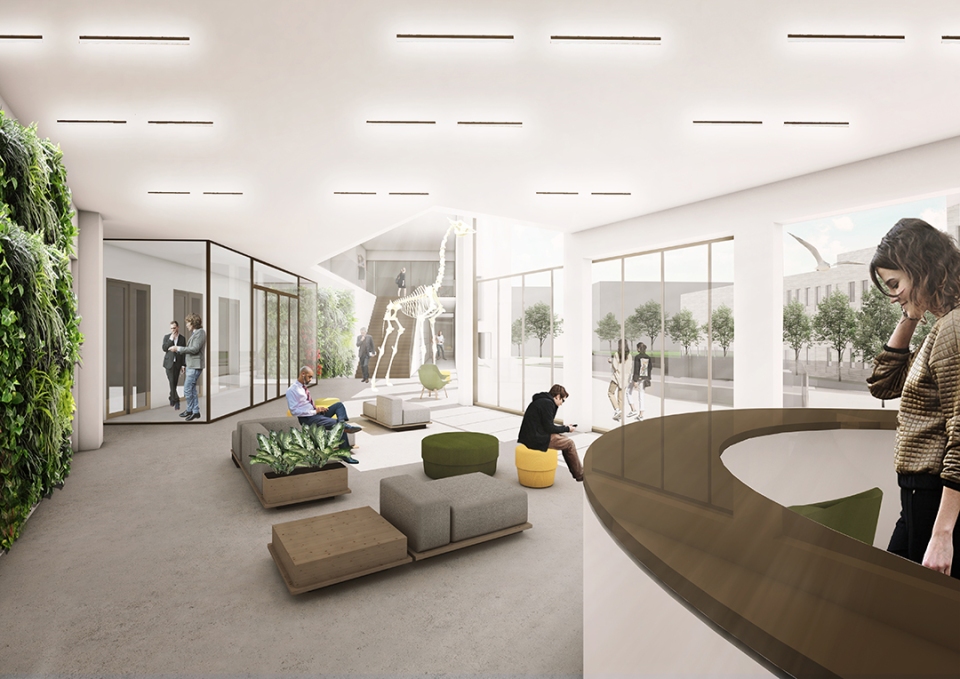 A facade with comfort
In addition to urban planning and logistic motives, the kinked bar also allows a logical response to the orientation. The bent shape maximizes the non-sun-exposed north facade and reduces the sun-exposed south facade. The climatically difficult to control east and west façades are minimized due to the strong solar load at beginning and end of a day. On the basis of an extensive study of temperature overruns and an investigation into possibilities for heat-cold-storage, a façade concept was presented in which a pleasant indoor climate can be realized with simple solutions.

Fossil free
One of the most important utilities, if not the most important in a laboratory, is ventilation. The principle for ventilation is based on a total system for all laboratories in the building and a separate system for the general rooms at the bottom of the building. The floors with the general laboratories are not technically split up into different zones, floors or the like, but are served by an installation that supplies all the floors with air. The air handling units distribute their air via a joint air duct system to the different floors and laboratories according to the “ring concept”. The generation of energy is completely fossil-free. In addition, extensive research was done into source systems at campus level, the possibilities of riothermia and the chance to use water of the Dijle-river as cooling.

Schedule
The design is now further elaborated in intensive consultation with the client and the users. The start of the construction work is planned for early 2019.

IADP-partner: Proof of the sum